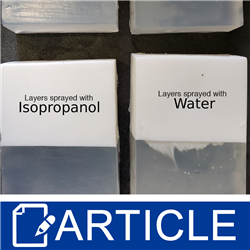 (Enlarge Image)
Because the chemistry of Cold Process (CP) soap is delightfully complex, I have spent many happy hours devising experiments to answer questions and solve problems for those who make CP soap. Makers of Melt and Pour (MP) soap, however, face problems different from those I have investigated before. For example, while CP and MP soaps can be poured in layers, CP layers are usually at the same temperature and in the same state (liquid). But a hot, liquid MP layer is usually poured on top of a cold, solid MP layer, and because of these differences, the joint between layers may not be strong. Additionally, transparent soap is much more common in the MP world than it is in the CP one, and so bubbles and blemishes within a transparent layer must be minimized.


Fortunately, makers of MP soap have largely solved both of these problems by spritzing each layer of soap with alcohol. So all that remains for me is to figure out why this works.

To begin with, I have to distinguish two usages for the word soap. For chemical and regulatory purposes, soap is an alkali salt of a fatty acid. But MP “soap” is almost always a blend of soaps, solvents, and detergents. For this project I used Crafter's Choice Premium Extra Clear Soap, which consists of sorbitol and propylene glycol (solvents), sodium laureth sulfate (detergent), sodium stearate and sodium myristate (soaps), and sodium cocoyl isethionate (detergent).  Crafter's Choice Premium Ultra White Soap has the same ingredients plus titanium dioxide colorant.

I also need to clarify the word alcohol. This is actually a family of chemicals with some familiar members. Ethanol (ethyl alcohol, grain alcohol, Everclear) is the one used in beverages. Isopropanol (isopropyl alcohol, rubbing alcohol) is the one used for first aid.

Soaps and detergents are surface-active agents, or surfactants, meaning that they form organized structures at aqueous surfaces. The molecules organize into a film on top, which we recognize as bubbles, and into droplets called micelles in the interior. When soap or detergent is added to water, they don't actually dissolve—they form an emulsion. You can see this for yourself by adding, for example, one gram of MP soap to 200 mL of hot water. A soap/water emulsion is cloudy (because of the micelles), not transparent, with bubbles at the surface.

In contrast, soaps and detergents actually dissolve in ethanol and isopropanol. Rather than forming a cloudy emulsion with bubbles at the surface, a soap/alcohol solution is transparent, with no bubbles. The soap and detergent molecules do not organize into films and micelles, but float around in the alcohol as individual molecules. Figure 1 shows a soap/water emulsion on the left, and soap/ethanol and soap/isopropanol solutions in the center and on the right. Even when these solutions are shaken, no bubbles form because the soap molecules do not form a film at the surface.

So when you spritz alcohol onto bubbles at the surface of MP soap, the soap dissolves in the alcohol. The ordered film of soap molecules breaks up into individual molecules, and the bubbles disappear.

In addition to removing bubbles, I wanted to explore whether alcohol helps soap layers to adhere to one another. I began by supposing that alcohol dissolved some of the soap at the surface of a cold, solid layer of soap, and that when hot liquid soap was poured on top of it, the hot liquid mixed with the soap solution, forming a zone containing soap from both layers. But how to test this hypothesis?

I wanted to pour two layers that could be easily distinguished from one another, so I chose a transparent layer and a white layer. I also wanted to be able to try to break the layers apart so that I could see whether they had, in fact, blended together. But layers are most frequently poured horizontally, and pulling apart such layers seemed problematic at best. So I opted to pour two white bars of soap. After they cooled to room temperature, I cut each bar in half and returned a white half-bar to the left side of four single-bar molds. I then poured transparent soap into the right side of each mold. The result was four bars, each with a white half and a transparent half, as shown in Figure 2.
I wanted to be able to treat the white/transparent interface of each bar to see what, if any, effect alcohol might have. One bar was not treated. The interfaces of the second, third, and fourth bars was treated with water, ethanol, and isopropanol, respectively. The joint between the layers was crisp and clean for three of the bars, but the one treated with water had visible tendrils of white soap penetrating the transparent layer.

Compared to the untreated bar, the one treated with water had the strongest joint, but streamers of white soap visibly penetrated the transparent soap. This could be an interesting feature if done on purpose, but most people would consider this a blemish. The bar treated with isopropanol was very similar to the untreated bar. In a horizontal layer, bubbles could weaken the joint, and spraying with isopropanol may eliminate bubbles, but it does not seem to otherwise improve the joint. The winner in this round was ethanol. The white/transparent interface remained crisp and clean, but the joint was noticeably strengthened compared to the untreated bar.
This does not mean you have to ditch isopropanol for ethanol. After all, if it ain't broke... But if you have a problem with weak joints between soap layers, ethanol may provide improved adhesion between layers without sacrificing clean lines. And if you want some interesting texture, you may want to investigate a joint venture with water.