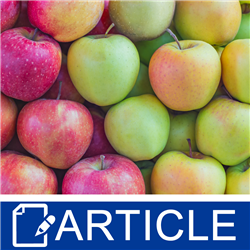 (Enlarge Image)
The importance of apples not only for eating but in our skin-care products, too!

Fall rapidly approaches and with it, crisp, thin-skinned delicate fruit. Its perfume punctuated with ever so slightly floral notes and an incomparable tartness. Apple season is here. You might prefer the tart greenness of Granny Smith or the sweetness of Fuji. Perhaps the crisp flesh of the exceptionally juicy Macintosh is what sets your world ablaze. Some find Honeycrisp or Pink Lady to be life-changing. Regardless of variety, an apple is a sweet, edible fruit produced by an apple tree (Malus pumila). Apple trees are cultivated worldwide and are the most widely grown species in the genus Malus. The apple is a pome (fleshy) fruit, in which the ripened ovary and surrounding tissue both become fleshy and edible. Apple varieties (there are thousands) fall into three broad classes: (1) cider varieties; (2) cooking varieties; and (3) dessert varieties, which differ widely but tend to emphasize color, size, aroma, smoothness, crispness and tang.

We hear as children, “an apple a day, no doctor to pay”; there’s some truth to that proverb. An Ohio State University study in 2012 found that eating an apple a day helped significantly lower levels of bad cholesterol in middle-aged adults, and in 2011 a Dutch study found that eating apples and pears might help prevent strokes.

Apples contain various phytochemicals including flavonoids (catechins, flavanols and quercetin) and other phenolic compounds (epicatechin and procyanidins) found in the skin, core and pulp of the apple. Because the apple peels contain more antioxidant compounds, especially quercetin, apple peels may have higher antioxidant activity and higher bioactivity than the flesh. Research showed that apples without the peels had less antioxidant activity than apples with the skins. Complex sugars from apple pectin may have anti-aging effects.

The following cosmetic functions have been reported for ingredients derived from Pyrus malus:

Alpha-hydroxy acids, which refines the texture of and lend a rejuvenated look to the skin, are naturally present in apples. Apples are significant in personal care products due to the presence of an alpha-hydroxy acid (AHA), malic acid, which promotes the appearance of healthy, smoother feeling skin.

Malic acid, an acid present in apples and pears, was first isolated from apple juice in 1785. This naturally occurring acid contributes to the sourness of green apples and is commonly used as a food additive to produce a sour taste.

AHA’s are being used more frequently in cosmetic formulations as a chemical exfoliant to help reduce signs of photodamage and aging. AHA technology is inspired by professional chemical peel treatments used by dermatologists to treat various skin conditions. AHAs of natural origin are perceived by consumers as safer and of greater benefit to the user. AHA usage has become popular due to immediate perceived effects as well as ease of use in water-based cosmetic formulations for improvement of skin texture and to minimize the appearance of pores, fine lines and wrinkles. Additionally, many AHA products are available over-the-counter without a prescription. Some products containing AHAs are marketed for uses such as treating acne, removing scars, and lightening skin discoloration. Products that are intended for use in the diagnosis, cure, mitigation, treatment, or prevention of disease, or to affect the structure or any function of the body are drugs under the law and must follow the guidelines set forth for cosmetics that are also classified as drugs, including active ingredient declaration.

Apple Powder is a readily available additive for home crafters and is best known for its moisturizing properties, making it useful in skin care formulations for dry or mature skin. This water-soluble powder can be added to many different types of cosmetic formulations and can even be used as a gentle exfoliant in scrub products.

Anti-aging skin care increasingly features stem-cell based technology. One supplier has already capitalized on apple extract in this way. Phytocell Tech™ Malus Domestica is derived from the callus cells of the rare Swiss Uttwiler Spätlauber apple tree species. The company developed a method to cultivate large quantities of the plant cells in the laboratory from plants that are rare, protected, seasonal or otherwise unavailable. Internal fluid from these plant cells contain components the company claims help to preserve and maintain the function of human stem cells. The Uttwiler Spätlauber apple stem cells are also thought to contain metabolites to ensure longevity since this species of apple keeps well over long periods of time.
Apple cider vinegar is appearing more frequently in hair care formulations as it contains amino acids and pectin that contribute to helping strengthen and hydrate hair. Malic and acetic acids help cuticles to contract, increasing shine and smoothness. ACV may also offer some antimicrobial properties.

With the abundance of skin-safe apple derivatives available to formulators and the familiarity of this popular fruit amongst consumers, it makes sense that these naturally derived ingredients are popping up in mainstream and indie beauty brands alike.