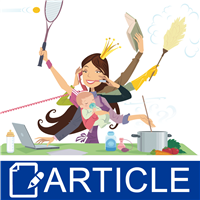 (Enlarge Image)
Women own more than 9.4 million businesses, employ nearly 7.9 million people, and generate $1.5 trillion in sales as of 2015. I’ve been an entrepreneur since 2005. I left the traditional workforce in my late 20’s with the notion that I was going to “reclaim my time.” There was never any doubt that becoming a business owner would be a lot of work, but I had no idea that it would become all-consuming.

Fast forward a decade. As I entered my late 30’s and got married, I also planned to become a mom. It honestly never occurred to me that motherhood could be any more difficult or all-enveloping than running a business. There’s even a name for mom’s who own businesses. “Mompreneur” is defined as a female business owner who is actively balancing the role of mom and the role of entrepreneur. I read all about mompreneurs, followed other entrepreneurial mom’s online, pinned time-saving pins on Pinterest and joined a mommy group on facebook. I was prepared to “mom!”

First-trimester exhaustion hit me hard. I slept 10-11 hours daily and barely functioned. Morning sickness was all-day sickness for weeks. I questioned my sanity. Half days at the of ce became the norm, but luckily I could delegate and had a staff to pick up the slack. Then, at around 11 weeks into my pregnancy, I had a medical scare and wound up in the emergency room. It was then that it dawned on me that I didn’t have a plan. I was just winging it. My husband pushed me to get more help, and it was hard to accept that I needed it.

Time starts becoming too precious to waste. The first order of business was to hire a young college student and get my work of ce organized. I’ve always been less of a “paper filer” and more of a “paper stacker.” My office frequently looked like a mine eld of paperwork. Employees got into the habit of handing me documents rather than setting them down because they weren’t sure if either of us would ever nd them again. We first tried a wall-hanging le system marked for inbound and outbound projects, but it became a catch-all. We eventually settled on an internal digital system utilizing Google Classroom for each project. It was simple to set up a project, add the appropriate staff working on that project, and keep all of the necessary documentation in one place for easy viewing. Being cloud-based meant I had access from home as well. We still use this free system almost a year later.

To cut down on the amount of paperwork (and the need to le it all), we invested in a Fujitsu ScanSnap system to scan and store documents on a computer, external hard drive and in the cloud (we use Google Drive). As soon as a paper is received, it gets scanned and led electronically. No more ling cabinets. No more paper stacks in my office.

Did you know that almost 70% of women cite “flexibility” as the number one advantage to having their own business? As I am approaching 40, I was considered “advanced maternal age” which meant I had more frequent doctor’s appointments and had to be out of the office regularly. Staff needed a better idea of when and where I would be available, and again, we found our solution through Google with Google Calendar. The system allowed us to set up and sync work calendars for every team member and allows each employee on a project to see when their other team members are available.

No matter your age, everyone voices an opinion about the choices you make as a mom. Being an entrepreneur encourages you to ex your tenacious side while teaching you discipline. You need both once you become a mompreneur. You accept that every moment working is a moment away from your family and you learn to sacrifice. You excel at having backup plans, plural. I desperately wanted to breastfeed for a year and ended up exclusively pumping breastmilk for my daughter. Eight times daily until my daughter was six months old (and beyond), I hooked up to a pump for at least 30 minutes to express breast milk. That’s 4 hours making milk per day! This was so important to me that when I was speaking as an expert at a recent industry conference, I scheduled time away in my hotel room every few hours to pump and maintain my supply. I multitask and use those 4 hours daily to catch up on computer work, write articles like this one, respond to emails and update projects.

Patience becomes thrust upon you in motherhood, and that translates for me into being a better, more human boss. However, the biggest lesson that being a mompreneur has taught me is to stop sweating the small stuff. If you haven’t already guessed, it’s all small stuff.