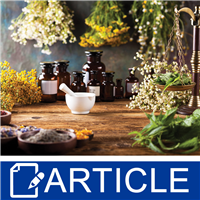 (Enlarge Image)
What in the world do the terms top, middle and base notes mean in relation to creating amazing fragrance blends?

Top or head notes are those we smell first. Odors we might describe as “fresh”, “bright”, or “fruity”, include citrus, marine, green, bright or herbal scents. They are our first impression of a fragrance but dissipate the quickest, in about 15 minutes. All fragrance molecules are volatile molecules, small molecules that measure 300 Daltons or less, that are easily converted from liquid to gas through the process of evaporation. Top note molecules tend to have weaker intermolecular forces keeping them together and lower boiling points, both which makes them evaporate quicker. They also tend to be more water or alcohol soluble than those found in middle or base notes.

Top notes can include small esters like ethyl valerate with its fruity, apple odor or ethyl hexanoate with a pineapple or banana fragrance, both of which can be created through esterification, a reaction between a carboxylic acid and an alcohol. We also find a number of other small molecules in essential oils, like linalool, a monoterpene alcohol found in bergamot, lavender and lilies, amongst others that evaporate quickly to give a lavender or woody smell; alpha-Terpineol, which is most identifiable as the smell of pine we associate with disinfectants; and limonene, a terpene found in the rinds of citrus fruit that has an incredible orange smell. (The latter is also a fantastic de-greasing agent that works well at 5% in a liquid dish washing soap to help clean those oil soaked containers after a day of crafting in the workshop!)

Middle or heart notes last up to four hours, and tend to be the dominant scent we remember most - clean, floral or spicy scents like rose, lavender, marjoram, anise, cinnamon or nutmeg. The molecules are larger than those found in the top note and may absorb to a medium like hair, skin, fabric or paper to linger longer in a phenomenon known as substantivity. They’re less water or alcohol soluble than top notes and include benzyl acetate, found in ylang ylang, smells like jasmine; eugenol, found in clove, nutmeg and cinnamon; and anethole from anise, fennel and liquorice.

Base notes are large molecules that could last from four to eight hours, or even longer on fabric or paper, like an air freshener. They tend to be described as musky, woody or animalistic, and include sandalwood, vetiver and vanilla. In the past, animal products from civets or beavers (castoreum) were used to provide musky base notes, but fortunately, these have been replaced by compounds that include large esters called lactones and large globular ketones, like cyclopentadecanone. These molecules tend to be more oil than water soluble, less volatile, and more substantive, hence their longer lasting profile, and they include molecules like santalol from sandalwood, patchoulol from patchouli, and caryophyllene from cloves and rosemary.

Naturally occurring fragrances and essential oils contain dozens of chemical compounds contributing to their smell, and generally contain top, middle and base notes. Vanilla contains upwards of 170 chemical compounds, including the ester methyl cinnamate, described as sweet and balsamic; furfural, an aldehyde that smells of almonds; and vanillin, a phenolic aldehyde you’d immediately recognize as, well, vanilla. Rose essential oil contains many compounds, including citronellol and geraniol, two monoterpenoids with a citrus rose fragrance; nerol, a monoterpene with a sweet, fresh, rose scent; and phenylethyl alcohol, which has a floral odor.

When creating a signature scent, generally you’ll want to combine these notes to create a complex fragrance profile that’ll last throughout the day. A combination that includes a top note like lemon, a middle note like anise, and a base note like vanilla will last longer than an all head note combination of orange, grapefruit, lime and lemon. If I add a base note to a citrus blend, I can create anything from Memories of Christmas Day with orange and clove, Fresh Lemon Meringue pie with vanilla, or Earl Grey tea with bergamot, vanilla and a titch of honey.

Consider which fragrance blends work best with your products, as there’s definitely a place for an all head note combination in a rinse off like shampoo, soap, or body wash. Nothing says “wake up!” like a blast of floral or citrus goodness to start your day! One of my favorite body wash blends contains a burst of lime eucalyptus, a fragrance filled with small molecules like limonene, eucalyptol and linalool that spring from the bottle in a head note jumble of citrus, green and fresh fragrances.

Given their volatility, fragrances can change over time. It’s best to monitor how various blends interact over time with your products like soap, emulsified scrubs and lotions. That amazing cotton candy fragrance oil you’ve added to a body lotion might smell like spun sugar today, but it might be all about the vanilla a few weeks from now. I’ve had more than one lotion that started off as key lime pie, morph to be far more about the pie than the citrus. (These aren’t bad results, but it’s important to know the end result when you present your product to the public.)

Now that you know all about notes, get into the workshop and formulate some awesome blends to create some exciting, complex fragrance profiles and longer lasting scents.