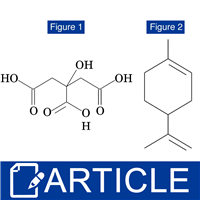 (Enlarge Image)
Following this month's citrus theme, I thought I would explore the properties of two compounds common to all citrus plants: citric acid and limonene. Though they come from the same fruits, these two chemicals could not be more different from one another. One is soluble in water, the other isn't. One has a strong taste, the other a strong aroma. One will sequester metal ions, the other will dissolve grease and many adhesives. Two powerful and commercially important chemicals from the same little package of lemony goodness.

Before we discuss these molecules, we need to review a little water chemistry. You probably don't even remember when you learned the formula, H2O. It is simply common knowledge. But those three little atoms dominate the properties of the world as we know it. Hydrogen and oxygen atoms are bound to one another by electrons, which carry a negative charge. But they don't share those electrons equally. Oxygen is a relative electron hog, and hydrogen is a light-weight. The result is that oxygen atoms in water are partially negative, and hydrogen atoms partially positive. Opposites attract. The negative oxygen atom of one water molecule is attracted to the positive hydrogen atoms of each neighboring water molecule, and vice versa. The result is that water molecules are attracted to one another more strongly than they are to just about any other molecule.
Figure 1 shows a structural formula for citric acid. As discussed in last month's column, a structural formula is the kind of thing that a chemist can easily draw on a napkin when talking to another chemist. A structural formula tries to include the most important details about the molecule without worrying about extraneous details. Each line represents a bond, and if two bonds join with no explicit atoms, the bonds are assumed to join two carbon atoms. Each carbon atom bristles with one, two, or three hydrogen atoms, but the structural formula leaves them to your imagination. Though all organic molecules contain carbon, their chemical properties are dominated by the atoms other than carbon.

This formula has seven oxygen atoms, four of which are bound to hydrogen atoms. The other three oxygen atoms are “double bonded” to carbon atoms. That grouping of a double bonded oxygen next to an OH is instantly recognizable to a chemist as an acid group, and if it looks familiar, you may be remembering it from last month's column. It is the same grouping at the hydrophilic head of a fatty acid. Citric acid has three such groups, which packs an awful lot  of acidity into a tiny, little package.
To a water molecule, those OH groups are nearly as attractive as other water molecules. For this reason, citric acid is quite soluble in water (and saliva). And because three of those OH groups are next to double-bonded oxygen atoms, the hydrogen atoms are acidic. The defining property that led chemists to recognize acids as a group is that they taste sour. And citrus juices contain both citric acid and various sugars, leading to the combination of sweet and sour we describe as “tangy.”

Citric acid has one more property that makes it important for makers of soap and cosmetics—it can bind to metal ions in aqueous solution. Metal ions like calcium or iron can have deleterious effects on soaps and cosmetics. Calcium from hard water, for example, combines with soap to produce soap scum. In a high-pH product like soap, sodium citrate (the sodium salt of citric acid) can be used to tie up these metals, preventing them from binding to soap.
Citric acid isn't the only useful chemical to come out of citrus fruits. Figure 2 shows a structural formula for limonene. While it's squiggly lines show how the carbon atoms are linked together, perhaps the most important thing about it is what you don't see. No oxygen. If you were a water molecule looking at limonene, you would find no familiar OH groups. A molecule like this is not soluble in water (or saliva), and consequently has little or no taste. And where do you find limonene? Not in the juice of the lemon, but in the oily rind. Limonene is a principle component of the oils pressed from the rinds of all citrus fruits.

Not only is limonene not attractive to water, the absence of atoms other than carbon and hydrogen means that it isn't strongly attracted to other molecules generally. That means it can easily evaporate, traveling from the rind, through the air, to your nose. That's why you can smell limonene in citrus oil, but not citric acid in the juice. Finally, because it does not dissolve in water, limonene is good at dissolving other things that are insoluble in water, things like adhesives, tar, and grease. That's why citrus oils have become useful as alternatives to petroleum solvents.
The detailed chemistry of these two molecules is beyond the scope of this article. But you are now able to look at structural formulas on websites and instantly know something about why a molecule behaves as it does. If it has an OH group, it interacts strongly with water. If it has multiple OH groups, it likely is soluble in water and saliva, has a strong taste, and not much of an aroma. If a molecule has no OH groups, it is likely insoluble in water or saliva, and relatively flavorless. I don't know about you, but after all this talk of molecules, I have a hankering for some lemonade.