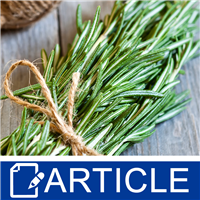 (Enlarge Image)
Rosemary is widely known for its use as a culinary herb. Rosmarinus officinalis is a woody, perennial with fragrant, needle-like leaves (similar to evergreen trees) and small white, pink, purple or blue flowers. Native to the Mediterranean, rosemary is a member of the mint family. Rosemary is often used as a decorative plant in gardens where it may exhibit pest control effects, while the leaves are frequently harvested and used to flavor various foods.

Rosemary contains a number of phytochemicals useful to skincare formulators. These include rosmarinic acid, camphor, caffeic acid, ursolic acid, betulinic acid, and the antioxidants carnosic acid and carnosol. Rosemary has been shown in various lab studies to have antioxidant properties. Antioxidants help neutralize harmful free radicals, which can damage cell membranes. Other studies indicate that rosemary oil appears to have antimicrobial properties (killing some bacteria and fungi in test tubes). It isn’t known whether rosemary would have the same effect in humans.

Rosemary extract is commonly used in skincare products where it has been shown to improve the shelf life and heat stability of omega 3-rich oils, which are prone to rancidity. Its function, however, is as an antioxidant rather than a preservative.

Historical records indicate that rosemary has been used to stimulate hair growth. Rosemary was used in one study of 84 people with alopecia areata (a disease in which hair falls out in patches). Those who massaged their scalp with rosemary and other essential oils (e.g. lavender, thyme, and cedar wood) every day for 7 months experienced significant hair regrowth compared to those who massaged their scalps without essential oils. However, the lack of further study makes it impossible to say whether rosemary actually caused the hair regrowth.

Rosemary is also used in aromatherapy to increase concentration and memory, and to relieve stress. One study suggests that rosemary, combined with other pleasant smelling oils, may lower cortisol levels and help reduce anxiety. Another study found that the use of lavender and rosemary essential oil reduced test-taking stress in graduate nursing students.

Recent research has shown that rosemary can help prevent cancer and age-related skin damage. The most well studied constituents of rosemary are caffeic acid and its derivative, rosmarinic acid. Rosemary is also a rich source of vitamin E (alpha tocopherol), another powerful antioxidant.

Rosemary essential oil, rosemary extract and even the rosemary herb can be found in personal care and home fragrance products ranging from perfumes, room sprays and candles. It can also be burned as incense, used in shampoos or added to home cleaning products. Rosemary is generally considered safe. However, there have been occasional reports of allergic reactions when consumed. Consuming large quantities of rosemary leaves, because of their volatile oil content, can cause serious side effects, including vomiting, spasms, coma and in some cases, pulmonary edema (fluid in the lungs). For these reasons, rosemary essential oil should never be used internally.
References: